I thought it was time to give an update on my personal brokerage account. I recently wrote about my stock pick of Metlife in my new  “Stocks for the long run” series, but I thought it would be a good idea to give a comprehensive update. The biggest update has to be the fact that I put a considerable amount of money into my brokerage account. I put my tax return along with all of the spare money in for investing.

My goal is still to hit 10% or greater return for the year, and I think this still is very possible despite taking a giant hit previously on both Netflixs and Amazon.  My account is up 2.66% as of today. I also have $429 worth of negative equity because of the options I wrote, and when these “out of the money” options expire that will add a 3.71% to my account. Additionally I will receive dividends from Dow Chemical (2.94% Yield), Hewlett Package Co. (1.99%), and Metlife (1.93%). These three stocks represent 83.7% of my portfolio.

As you can see, I have Dow Chemical and Metlife, both of which have cover calls written on them. I bought HPQ (Hewlett Package Co.) and had intentions of writing a cover call on it, but I decided to sit on it long for a bit. which was a big mistake. HPQ has single handedly drained all of my gain made from my other successful stocks picks in recent times. I have contemplated selling out of HPQ, but I stand by it strictly on fundamentals. I have considered writing an option on it today to offer some downward protection, but I feel if I am not long in the stock at $24.18, then I should just sell the stock altogether. I am long on HPQ unless something else changes. 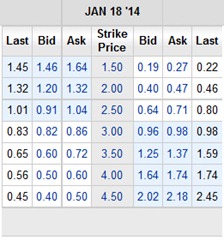 My Sprint option, which I have previously wrote about is up 26.42%. I remain long on Sprint. I have considered selling out and waiting for an adjustment, but I stand by my initial decision on this stock to be long. I also previously talked about straddling this Sprint Nextel Corporation and I think now is the time I would do so if I was considering taking a hedge position.

Overall I am very happy with my current brokerage account portfolio except for HPQ. I finally feel that my account is large enough to be relevant ($11,535). I also feel that things have finally settled down and I have found my trading strategy. I look forward to hitting double digit returns for 2012.