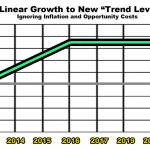 Today there was a revision to the housing market predictions for 2012. Over one hundred housing analysts and expert were surveyed by Zillow. The conclusion made was that they believe housing prices will drop 0.7% in 2012 and will hopefully return to “trend levels” by 2016. “Trend levels” apparently now mean roughly 3.5% a year of appreciation. These statements have officially made me view housing as one of the worst possible investments you can possibly make in the foreseeable future.

All of these realtors and experts don’t talk about one of the most important factors, inflation. If you have a 0.7% decline in the housing market in 2012, you also have to add in yearly inflation in as a loss as well. Think about it, if you own you home outright, you need your house to increase at the rate of inflation to break even (although wise it’s a deprecation asset). So that 0.7% decline is really going to be  3.2% loss if inflation is 2.5% for 2012 (2.5% is a complete guess on inflation rates). Own a $250,000 house? You are looking at an inflated adjusted net loss of roughly $8,000 in 2012.

If these analysts were right, which they rarely are, a linear transition to these “trend levels” would look something like this: 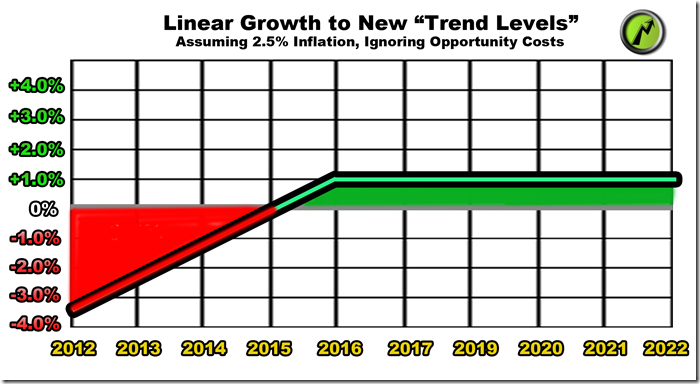 Sadly would take you 2016, 2017, 2018, 2019, 2020, 2021, and half of 2022 to recover the 6.5% inflation adjusted loss in years of 2012 through 2015. These analysts are usually bias in favor of the housing market, but what they are predicting is that you will break even sometime in 2022, assuming a 2.5% inflation rate. You want to take it a step further? Assuming you put 20% down on your home and you could have earned just 5% return on that money, it would add 1% of your home value off opportunity cost. Adding that opportunity cost into the inflation adjusted numbers above you get: 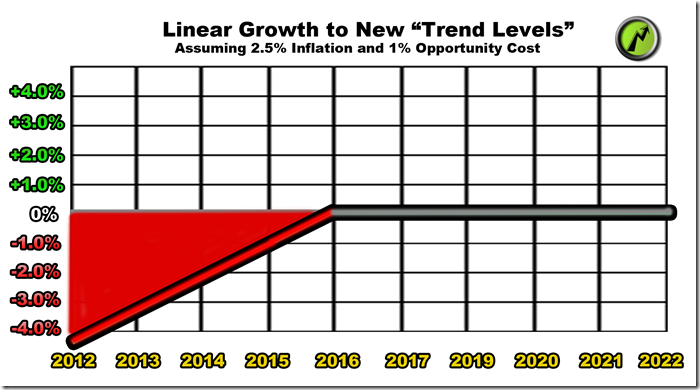 Total Inflation and Opportunity Cost:  10.5% of your home value (ignoring all other costs of buying, selling, and owning a home).

I am a homeowner and when I hear and read about the housing market, it scares me. The reason it scares me the most is the only way home ownership makes any sense financially is if the “trend levels” go back to pre-bubble and I absolutely never want the “trend levels” to be that high ever again for the rest of my life. Even at today’s prices I view home ownership as terrible investment and if prices go higher, I don’t think I would ever want to own a home again. Although according to these housing experts, that doesn’t seem to be a concern since prices are probably going to decline when you factor in inflation.

Disclaimer: Home ownership is much large than just investing, I cannot place a value on any personal factors when it comes to a housing decisions (family, personal pride, etc.). This article is strictly opinion and has made assumptions that are not backed up by anything (2.5% inflation and 5% return on money). This article should not be the base of any decision making. Always consult a professional.