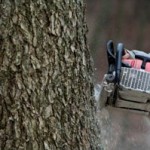 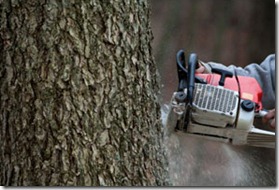 500 reasons or more specifically – $500 that I am now out because of being a home owner. I had two dead trees in my back yard that had to be removed and I had a follow up trip to home depot that combined racked up $500 of my hard earned cash.

The tree removal cost: $300 – the team dropped, cut up, (but did not split) and stacked the wood. They cleaned up all of the branches and hauled everything I wanted them too. They were bonded and insured (which is what I was paying for, since I would do it myself if I could). Two and a half hours, a team of 5 guys, 2 chainsaws, a big truck, rope, and some miscellaneous gear – and they were gone along with my cash.

I recently wrote about negotiating your professional services for your home – and this was a perfect example of when it paid off for me. Initially I was approached by a tree professional who wanted to “trim up and clean my front yard” (which had 3 trees) He quoted me $600 – which is hilarious since my front yard had very little work to be done. I told him I actually had work for him in the back yard. We went out back and he quoted me $700 for the two trees and the front yard cleanup. I wasn’t buying. I told him I just need the two trees and price was a concern. He quoted me $500 – then immediately $350 saying he just needed to get his guys work. I asked him if they haul the wood away – he said yes. I asked him if it would be cheaper if he left the wood, he said he has to pay to dump the wood (which I’m not sure I believe) and that he drop and cut up the wood for $300.

I debated it, but because the two trees were near a fence and two of my neighbor’s sheds that housed some of the yard equipment – I thought “mine as well pay $300 and have it taken care of versus $500 insurance deductible and money to clean it up later when it falls.” I told him that he had to also cut several branches off the power-lines in the front yard. He agreed to cut them away from the power lines.

As for the wood they left, I plan on using the wood for my fireplace inside my home. Sadly I do not have an wood burning insert which would be effective of cutting my gas bill down, but I’m not sold on the idea of buying one. Regardless I do enjoy a good fire in the winter time.

My trip to home depot included a lot of things, but a maul to split the wood and a fire wood rack clocked in about $90 of my trip. Ouch. Hope I get a week to split all of it after the holidays!

Have to love being a home owner.